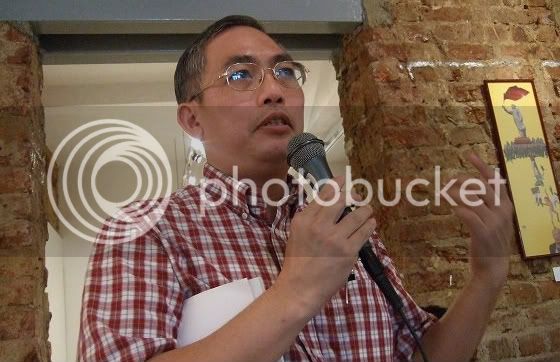 “A team building process cannot be based on a common enemy. It is not sustainable over the long term, ” Mr Goh Meng Seng told participants at a public workshop on electoral reform organised by Singaporeans For Democracy (SFD). “What will happen [to Opposition unity] when LKY dies or when PAP looses half its support?” This reply was a response to a question from the floor on Opposition unity. Mr Goh is the Secretary-General of the National Solidarity Party (NSP) and a panelist at the workshop. The 40-year-old politician was elected to the top post at NSP this February.

He told participants that PAP practises confrontational politics because of its historical baggage with colonialism and communism. As such, it is not unusual for PAP to treat Opposition politicians as troublemakers. This mindset is not sustainable. “You must first believe that the Opposition is part of the government, but plays a different role,” Mr Goh told the participants.

The ‘troublemaker’ mindset is evident in the Political Donation Act. Total anonymous donation to political parties cannot exceed S$5,000 a year. This limit is hardly enough to cover a year’s rent of office space for the political party. To make matters worse, the Singapore Land Authority does not permit residential spaces (e.g. HDB flat) to be used for conducting political activities. Yet, MPs can rent void deck space of HDB flats for political outreach. Moreover, PAP MPs enjoy a discount when they rent the HDB void deck space through the People’s Association.

This constraints political competition in Singapore. Mr Goh pointed out that political competition is good for the state. This is why political parties in Hong Kong and Taiwan enjoy state funding as long as the parties can win votes above a particular threshold. Perhaps Singapore should do the same to allow the current political system to be more balanced. Political parties are agent of change, but change still must come from the electorate. The electorate has to believe in fairness in the political system.

In Singapore, the elected MP is not given funds to set up an office in his constituency. In Hong Kong, the elected representatives and town councillors receive state funding to pay for the office rent and staff salaries for the operation of his office. In comparison, Singapore is very primitive. Opposition MPs have to meet their constituents in the HDB void deck. Certain constituents require privacy when meeting their MP but this is not possible if the Opposition MP has no office space.

Mr Goh also shared his concern that Prime Minister Lee Hsien Loong had refused to call for by-election in response to the news that Dr Balaji Sadasivan, a MP of the Ang Mo Kio GRC, had passed away from Colon Cancer. The Prime Minister’s rationale is that the remaining MPs in the same GRC can take on his roles and responsibilities. Mr Goh pointed out that a MP has 2 roles: (1) serve the constituents; and (2) debate in parliament. “How can anyone simply replaces another MP to debate in parliament?” he said.

Mr Goh also raised another concern relating to the GRC – race politics. The Election Department requires the certification of race of General Election candidates of minority race. This certification is not permanent. It is only valid for one General Election, so candidates have to be re-certified at every General Election. “Does your race change over time?” asked Mr Goh. According to Mr Goh, the reason for the certification of minority race is to inform PAP how many wards the Opposition will be contesting. The Election Department reports to the Prime Minister’s Office. Moreover, it creates the perception among minority race candidates that the opposition political parties need them because of their race and not their individual merits such as integrity and political acumen.

The Elections Department is also in charge of venue booking during General Election campaign period. Rallies are important for opposition parties as they are the only means for an Opposition political party to access masses during the campaign period. “Singapore has a very primitive way for the Opposition to book rally venues. People has to start queuing up the night before [outside the Elections Department],” said Mr Goh. Online booking of venues is so prevalent today. Mr Goh noted that the ruling party benefits from the current set-up as it can easily mobilise a lot of people to queue, unlike any of the Opposition political parties.

There were 2 other panelists – Mr Chia Li Tik (Secretary-General of the Socialist Front) and Dr James Gomez (Executive Director of SFD). Film maker Martyn See was the workshop moderator. The workshop, titled SFD Election Consultation, was held at Post Museum on 2 Oct 2010 (Saturday) from 1500 to 1800. There were 50 participants in total. The 3 panelists had campaigned together as candidates under the Workers’ Party in the 2001 General Election.

A photo essay of the SFD Election Consultation workshop can be found at New Asia Republic’s facebook. The photo essay includes the summaries of speech made by other panelists and the floor participants.